Join VIP to remove all ads and videos

Character Creation for Mass Effect 2 allows players to fully customize their hero. When you create a new character, you will be given the opportunity to choose your Pre-service History, Psychological Profile (Reputation), Class and the appearance of your character.

If you have played Mass Effect 1, you can choose to import your character. This will allow you to play Mass Effect 2 with the same character and decisions you made during ME1. This will affect the storyline of Mass Effect 2. Please notice that you can still change the appearance of your imported character and the Class it belongs, though the Pre-service History, Level and Profile of your original character will remain the same.

If you are starting a completely new character, you can previously acquire and complete Mass Effect: Genesis, an interactive story that lasts about 15 minutes, which will allow you to get a summary of ME1 Story and to make the most important decisions from ME1 that will determine the storyline of Mass Effect 2.

All Enemies, including Bosses, are scaled down relative to the player's level. Most Enemies have no special protection or immunities.

Bosses scale up based on the player's level. Some Enemies have special protection.

Bosses and sub-bosses scale up based on player level. Most Enemies have special protection

After finishing the game on any of the above difficulties, the Hardcore difficulty will be unlocked. In Mass Effect Insanity is the highest difficulty setting. The only way to unlock the Insanity mode, is if you complete the game on Hardcore mode without changing the difficulty during the game. Playing on Insanity difficulty with a brand new (level 1) character is very tough as Enemies can deal a lot of punishment.

Most Enemies are scaled up based on player's level. All Enemies have protection. Bosses have immunities

There are six base Classes, with variable strength in up to three areas for the player. Some Classes concentrate all their strength in one skill area; others divide it between two areas to balance tactics. Combat skills deal maximum damage to Enemies. Tech skills allow decrypting security systems and weakening enemy Weapons. Biotic skills enable brain impulses to manipulate the physical world.

Soldiers are combat specialists ideal for the front lines of a firefight. Soldiers get improved health, can train in most of the Weapon types, Gameplay focus is on getting into the thick of the fight, picking the right weapon for tactical situations, and outlasting opponents. Soldiers can use a variety of weapons (except for Submachine Guns) and can take advantage in the battle from their Adrenaline Rush to slow down time and avoid attacks.

Engineers are tech specialists. Using the holographic Omni-tool, they can decrypt security systems, repair or modify technical equipment, disrupt enemy weapons or shields, and heal their squad. Engineers can only use Light Armor, and can only receive weapons training with Pistols. Gameplay focus is on shaping the battlefield during combat, healing the party, and debuffing enemies (disabling weapons and lowering shields).

Adepts are biotic specialists. Through upgradeable implants they can use biotic powers to lift or throw objects, shield the squad and disable or destroy enemies. Gameplay focus is on disabling and debuffing enemies while dealing massive amounts of damage.

Infiltrators combine both combat and tech abilities to specialize in killing or disabling enemies at long range. Infiltrators are trained to use Omni-tools, focusing on decryption and offensive abilities rather than healing. Gameplay focus is on unlocking alternate routes, gaining access to good equipment, and obtaining an advantageous position over enemies in combat by moving undetected.

Sentinels combine biotic and tech abilities. Typically, they use biotic abilities and advanced healing skills to defend allies, though they can also disrupt opponents with biotic or tech attacks. They are more efficient at tech and Biotics than other classes, but at the expense of combat. Gameplay focus is on protecting the party using kinetic barriers and healing it with advanced medical training.

Vanguards are biotic warriors. They combine Biotics and Weapons to take down opponents, and are especially deadly at short range. Gameplay focus is on taking down enemies with quick and brutal force.

Next, choose your custom character’s early history: Earthborn, Colonist, or Spacer. This choice represents the first of many that affect how characters will react to you during gameplay. Also, gives you a morality system bonus, depending on your selection. Furthermore, each option is related to a secondary mission during your playthrough.

Both of your parents were in the Alliance military. Your childhood was spent on ships and stations as they transferred from posting to posting, never staying in one location for more than a few years. Following in your parents' footsteps, you enlisted at the age of eighteen.

You were born and raised on Mindoir, a small border colony in the Attican Traverse. When you were sixteen slavers raided Mindoir, slaughtering your family and friends. You were saved by a passing Alliance patrol, and you enlisted with the military a few years later.

You were an orphan raised on the streets of the great megatropolises covering Earth. You escaped the life of petty crime and underworld gangs by enlisting with the Alliance military when you turned eighteen.

During your service, a mission you were on went horribly wrong. Trapped in an extreme survival situation, you had to overcome physical torments and psychological stresses that would have broken most people. You survived while all those around you fell, and now you alone are left to tell the tale.

Early in your military career you found yourself facing an overwhelming enemy force. You risked your own life to save your fellow soldiers and defeat the enemy despite the impossible odds. Your bravery and heroism have earned you medals and recognition from the Alliance fleet.

Throughout your military career, you have held fast to one basic rule: get the job done. You've been called cold, calculating, and brutal. Your reputation for ruthless efficiency makes your fellow soldiers wary of you. But when failure is not an option, the military always goes to you first.

This is the complete list of possible additional Bonus Powers in case you have already unlocked them all:

In Mass Effect 2 you can choose the default appearance for your character, which will feature:

On the other hand, you can use the Facial Customization on screen to create a unique face for your character. You can edit your character face appearance by choosing from a set of Presets or you can customize the entire face or focus the following specific areas:

Use the sliders in each section to adjust a range of facial details. Once you have finished your character customization, confirm your selection to go on: 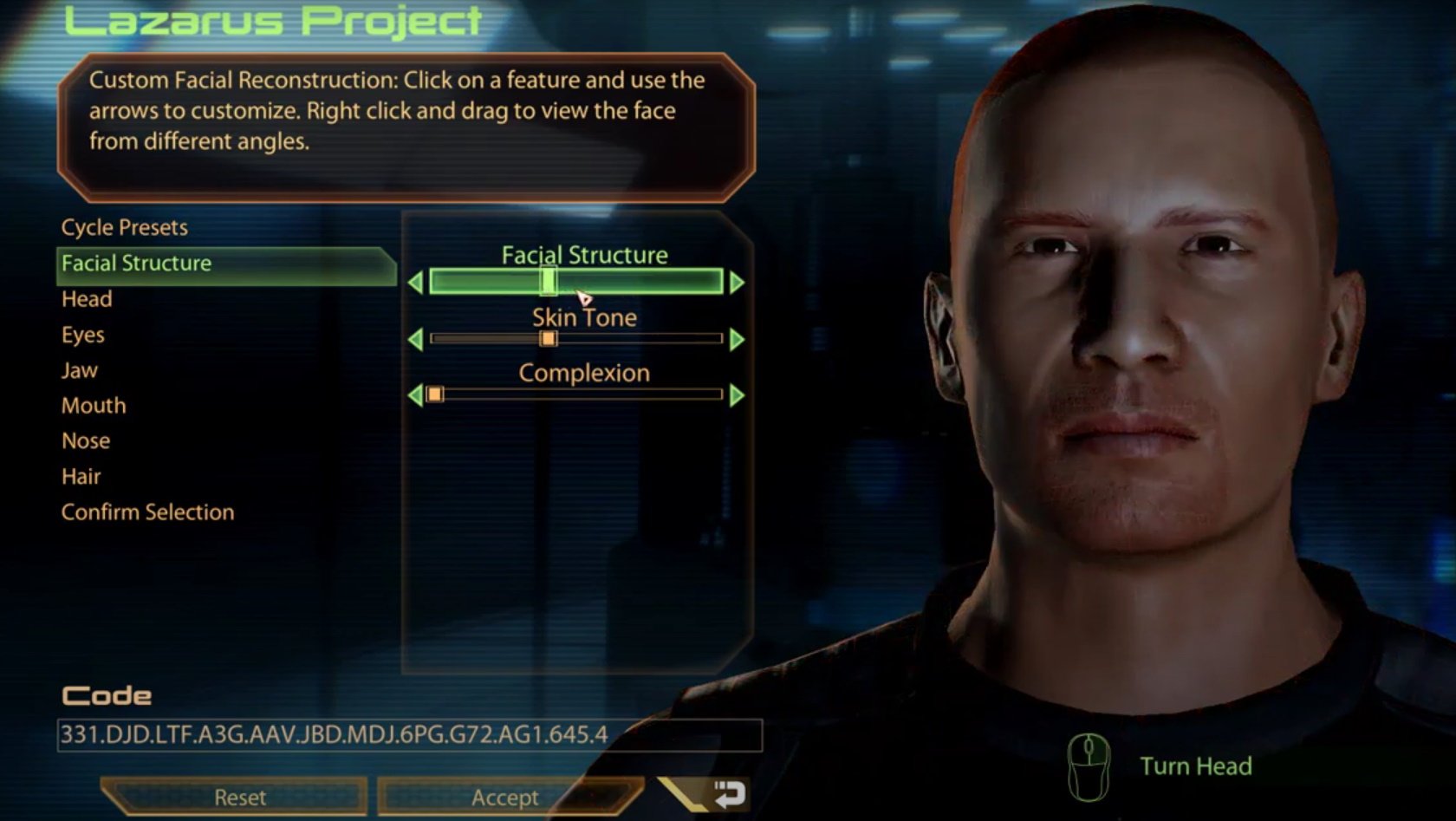